Xeno Blueblade only sells items to Sentinels. Upon joining Sentinel Faction, players are sent by Nexus Jay to talk to Xeno and receive a Rank 1 Sentinel specialty kit of their choice: Samurai, Knight, or Space Ranger. Although Sentinels receive their first Rank 1 specialty kit for free from Xeno Blueblade, they will need to purchase future books and gear from Xeno. Then, Xeno sends players to report in with Nexus Jay again to receive their next assignment.

After joining Sentinel Faction, players will be sent by Nexus Jay to purchase a Sentinel Super Soda from Xeno Blueblade. This mission is exclusive to Sentinels, though other factions have similar missions to purchase their respective consumables.

Xeno Blueblade also assigns Daily Missions to Sentinels. These missions include smashing Stromlings in the Battle of Nimbus Station, smashing objects on the Monument, fighting enemies in Avant Gardens, scoring points in the Cannon Cove Shooting Gallery, smashing and building in Pet Cove, smashing smashables on the Vertigo Loop Racetrack, and competing in races.

Until the Nexus Jawbox update, Xeno Blueblade sold Knight Books and Samurai Books, known in beta testing as Knight Scrolls and Samurai Scrolls, necessary to advance to the next rank of each kit. This update changed the ranking system of specialty kits, removing the Rank 2 and Rank 3 Books from Blueblade's inventory.

When the battle for Crux Prime began, Xeno Blueblade added alternately-colored Rank 3 gear and bags of Imaginite Crystals to his inventory. After Duke Exeter designed the Sentinel Startalon and Sentinel Stalwart, Xeno Blueblade began selling the modules of these vehicles. However, when Nexus Tower was completed, Xeno pulled these modules and all the Rank 3 gear from his inventory, instead letting fellow Sentinel Vendor Nikolai Gammapulse sell them.

Prior to the Power of the Nexus Force update, Xeno Blueblade had no dialogue. Prior to joining Nexus Force, any player could talk to Xeno Blueblade to view his inventory and the stats of the Sentinel gear. However, he would not sell them anything. Players received their first specialty kit from Dirk Manleigh. 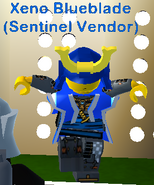 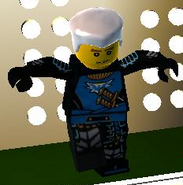 Xenu Blueblade's current hair
Add a photo to this gallery
Retrieved from "https://legouniverse.fandom.com/wiki/Xeno_Blueblade?oldid=154342"
Community content is available under CC-BY-SA unless otherwise noted.